Research & Development
If you meander around the CABLE CAR BARN on Washington and Mason you’ll see a gravestone that looks like this: 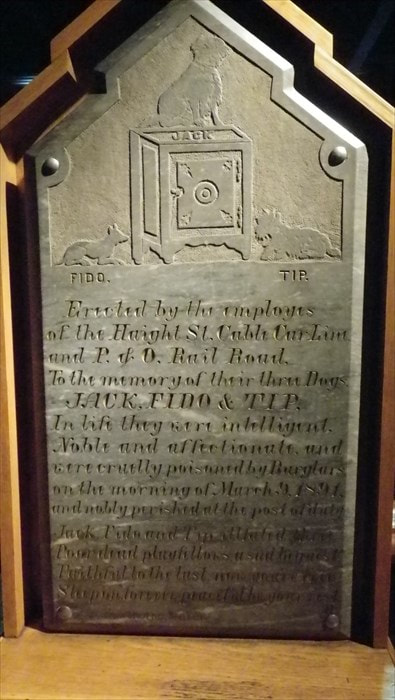 With no explanation beyond the sad story etched into the granite which goes like this:
Erected by the employes of the Haight St. Cable Car Line and P. & O. Rail Road. To the memory of their three Dogs, JACK, FIDO & TIP.

In life they were intelligent, Noble, and affectionate, and were cruelly poisoned by Burglars on the morning of March 9, 1891, and nobly perished at the post of duty.


Against your better judgement, you might spend 3 days online scanning state and local newspaper databases for the story.
You find it.
The San Francisco Call
Volume 69, Number 100
March 10, 1891 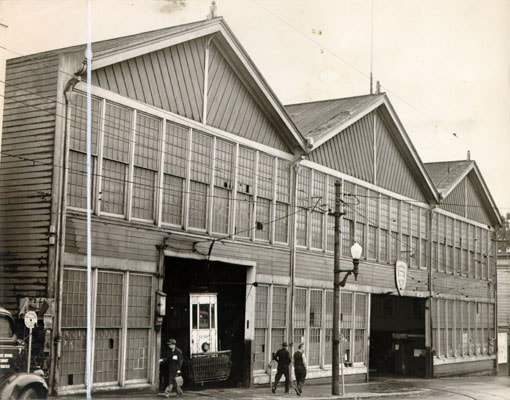 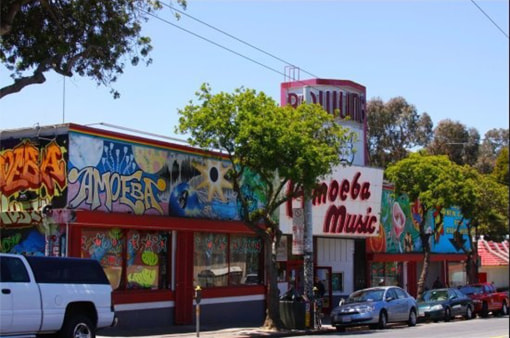 But no mention of the dogs, you note. Then you find this. Because now you can’t stop. 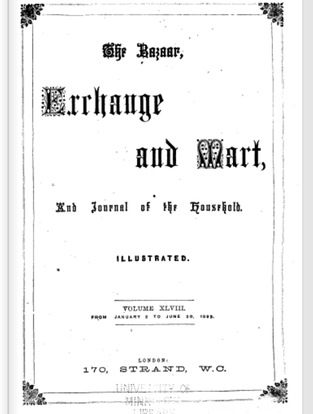 The Bazaar Exchange and Mart, And Journal of the Household
January 2 - June 30, 1893
London
A sort of almanac filled with a wide variety of domestic suggestions and stories including this one on page 722:
"It is not often that a dog's memory is perpetuated in marble and his grave kept green. Such a lot falls only to a hero in the canine race, and although there may be many such heroes in life they are seldom thought of after they have gone. Beside the roundhouse of the Park and Ocean Railroad, San Francisco...at the top of one slab, we are told in an American paper, is a representation of three dogs guarding a safe, and under it these words are engraved in gilt letters:
Jack, Fido and Tip ill-fated three.
Poor dead playfellows, a sad bequest.
Faithful to the last, now you're free.
Sleep on forever, peaceful be your rest."

You wonder about the roundhouse mentioned in the story and dig a little deeper. There was a P&O Powerhouse where Japantown now resides and down the way a P&O Railroad Car Barn still stands (now a Home Depot) at the corner of Geary and Arguello. San Francisco at that time was a city full of cemeteries. The Columbarium still sits regally off Arguello today. But after burial grounds were outlawed in The City, cemeteries were subdivided and developed. Joe Rossi Park sits where Odd Fellows Cemetery once did before its ghostly residents were exhumed and moved to Colma. These transfers were not necessarily orderly affairs.
The dogs would surely not have made the roll. These were different times.
So what happened to that heartfelt granite stone and how did it end up in the cable car barn on Washington and Mason? And then you find a picture of this nifty gal from the 1920's: 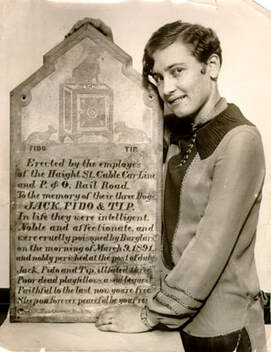 Her name is Vera Stevens. And yes, that's the gravestone that kicked off this scavenger hunt propped up next to her.
Oakland Tribune
April 25, 1929
Page 23
"SAN FRANCISCO: Long lost in debris at the site of the old car barn at Oak and Broderick streets, a monument street car men of 1891 caused to be erected in memory of three dogs who gave their lives defending the company's property has been found and today it is restored at the Haight Street Barn. The dogs, Jack, Fido and Tip were pets of the street car men until on March 9, 1891, burglars fed them poison as a prelude to looting the barns. As they died, the dogs barked until a night watchman was attracted and the burglars fled before they could plunder the premises. Street car men felt so aggrieved at the loss of the dogs that they contributed toward the marble monument." 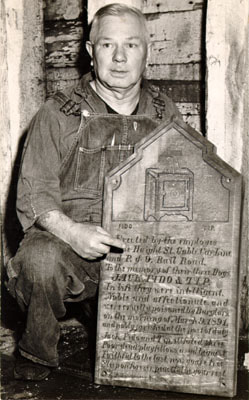 Long lost in the debris? How tragic.
But at least the 3 dogs were home again
This is John Nolan, shop foreman of the Haight St. Car Barn for 40 years, with the gravestone shortly before the Haight St. Car Barn was closed in 1948.
The headline read "Landmark To Go"
From there it ended up where it resides today at the Cable Car Barn and Museum on the corner of Washington and Mason.
It's worth a visit.
And maybe that's the end of the line, as they say.
Or maybe during this searching and sleuthing you come across a dictionary of slang from the Victorian Era which is so fascinating you decide to dust off the old tupper and write down the whole story
– the foiled burglary, the doggies, the mickey meat -
in authentic rigmarole and rhyme.
Because history has something to say. And maybe your curiosity serves a purpose.
It's not a surprising story. We've come to discover there are bad people everywhere in all times. But it is a timeless one.

A short selection from: A Witnessed Account of Detestable Malfeasance

"The next day in The Call it was reported, “No One Was Hurt”.
And that's true of bipedals, perhaps Darwin would assert.
But under the loco-motion and chuckaboo backbarishin'
Three doggies on duty, found poisoned and perishin'.

UPDATE
The doggy poem has found a home!
A Witnessed Account will be published in sPARKLE & bLINK 103
the literary magazine of
Quiet Lightning hosted a live reading and screening at The Balboa Theater
January 6, 2020
and it was a right racket.

Here's a link to the live reading of the poem.
Click subscribe while you're there
to gain access to the
wonderful, witty, whimsical, wise words of the Bay Area scene
brought to you by Quiet Lightning

Finally, speaking of words...
here's a glossary of the Victorian slang used in
A Witnessed Account of Detestable Malfeasance