Research & Development
Along the sloping green hills of the
National Cemetery at The Presidio
in San Francisco, California,
marble rows mark generations of sacrifice.
Heroes lost during WWI, WWII,
the Spanish American War
and the Civil War
lay side by side in eternal rest.

It is hallowed ground.

When the wind sweeps off San Francisco Bay
and slips through the eucalyptus trees
​that stand at attention
along the edge of the graveyard,
there is a sense that souls mingle here.
​ 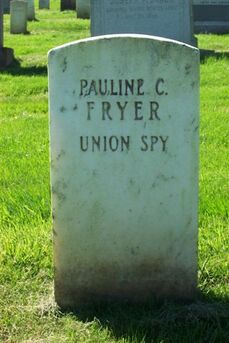 photo credit Diane Reich Find a Grave
As you stroll along the path, respectfully noting the names and dates
- young souls frozen in a time when war defined their age -
you may happen upon a marker that reads:

Each of the headstones surrounding you
tell a story
but this one...
its boldness entices.
​
Maybe you'd like to know more.
​Follow me. 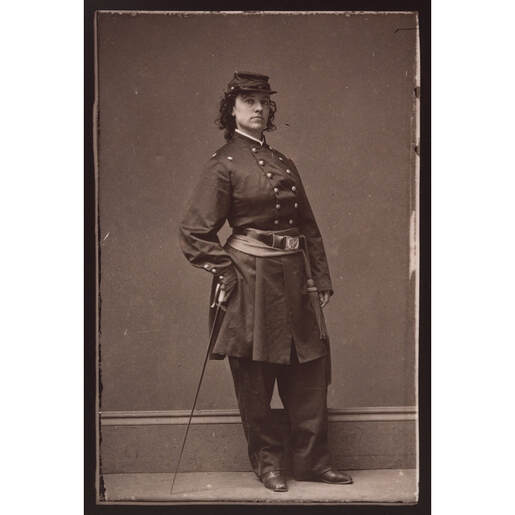 Developments in film processing
during the mid-1800's
made the
mass production of images
affordable.
These little portraits
served as calling cards
​ and collectible souvenirs.
They were all the rage in the mid-1860's.
Browse through the
Smithsonian National Portrait Gallery website
to see 100's of them.
While you're there...
The National Portrait Gallery's current exhibit
(through March 2022)
​is called Storied Women of the Civil War.
Pauline Cushman
is featured as one of those storied women.
​
This carte de visite of Pauline ​was published in 1864,
the same year
Miss Major Cushman
begins appearing at P.T. Barnum's American Museum
in New York City
sharing stories of
her adventures as a Union scout and spy
​ to adoring audiences. 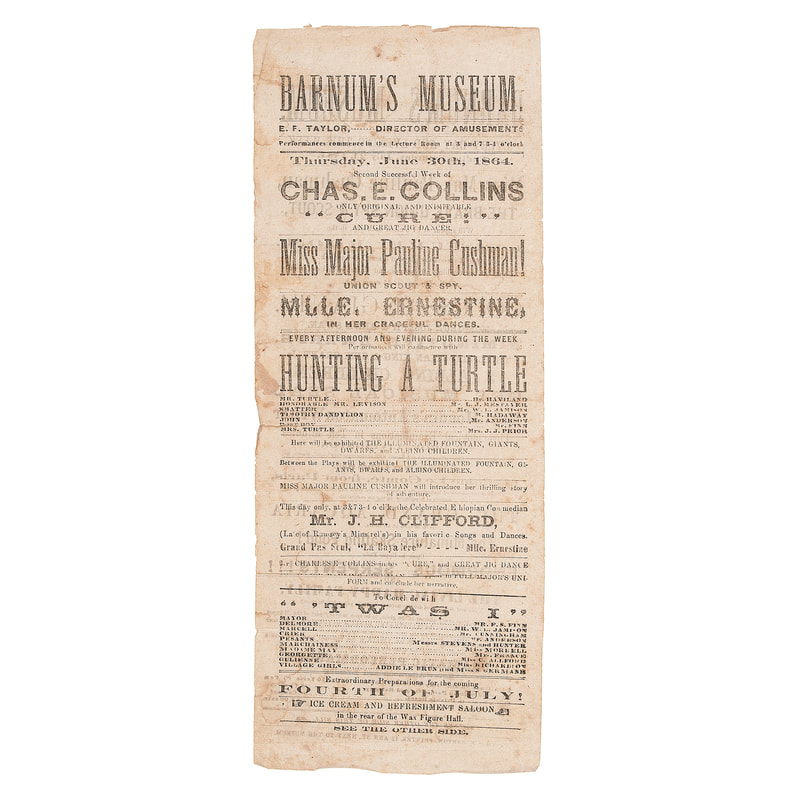 photo credit Cowan Auctions
Barnum placed this ad promoting the appearance of
Miss Maj. Pauline Cushman,
The Brave Union Spy & Scout.
Books of her thrilling adventures and Carte de Visites available for sale in the museum at 25 cents each. 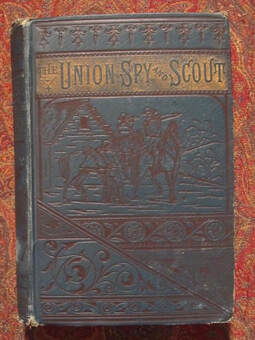 photo credit Worthpoint
So who is this Pauline Cushman?
Good question.
The most referenced source
- until only recently -
is this one:
Life of Pauline Cushman, the Celebrated Union Spy and Scout: Comprising Her Early History, Her Entry into the Secret Service of the Army of the Cumberland, and Exciting Adventures with the Rebel Chieftains and Others While Within the Enemy's Lines ... the Whole Carefully Prepared from Her Notes and Memoranda
[written by her friend,]
Ferdinand Sarmiento, first published in 1865.

Which is too bad.
Because Pauline is a real person,
an intriguing and fiercely independent historical figure.

Yet this conspired account
seems to raise doubt of her legitimacy.

Do Sarmiento's praises go too far?
Are Cushman's fables too grand?

The marketing of Pauline Cushman,
celebrated Union spy and scout
​ put "Miss Major" in the history books,
which was the plan.
Pauline craved immortality.
Yet it's the mere mortal in her that is most compelling. 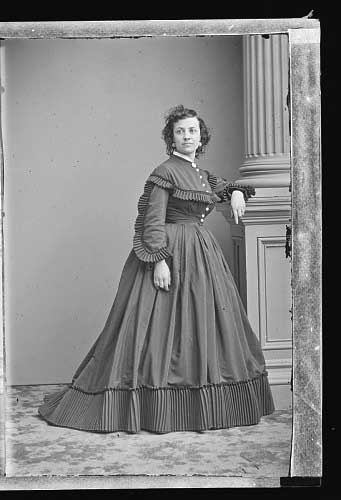 photo credit Mathew Brady Studios 1864 National Portrait Gallery at the Smithsonian
Born Harriet Wood in New Orleans (maybe)
in March 1833 (or maybe May or maybe June),
Pauline tours as an actress,
marries a musician she meets on the road,
has two children
and is widowed early into the Civil War.
To earn a living she turns again to touring,
leaving her children with family.
​
It seems Pauline feels most comfortable
in the saloons and theater districts
of the cities
where she fraternizes with ease,
playing to the national divide
​ with skilled duplicity.

A natural showman.
And that's why her story is tricky. 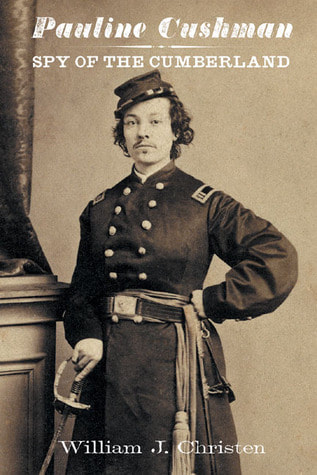 With its publication
the reiterated versions of the Sarmiento stories
which have been adopted as fact
over the last 150 years
are being re-examined.

Bill Christen's research cuts through
​the outward appearance
Pauline worked so hard to project
​to reveal deeper dimensions
of this flawed and fascinating woman.
​ 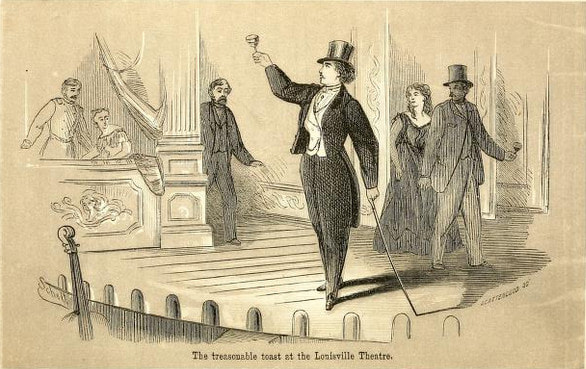 image source The Life of Pauline Cushman by Ferdinand Sarimento pg 63 The Treasonable Toast
Glaring in these discoveries is
A TREASONABLE TOAST
the story
Miss Major Cushman retells
nightly at Barnum's museum
and prints widely in circulated pamphlets
illustrating her entrance into the spy trade
when she raised a glass to Jefferson Davis
during a stage performance
in Louisville, Kentucky
as a winning ploy to gain Confederate trust.
​
It seems this dramatic turn
may be less than true.

Some artistic license may have also been taken
in regard to her stealing a young man's uniform and masquerading as a rebel soldier.
And perhaps her sentence to death by hanging
and subsequent 11th hour rescue during the pivotal
​Battle of Shelbyville,
plays to the drama more than the actual storyline. 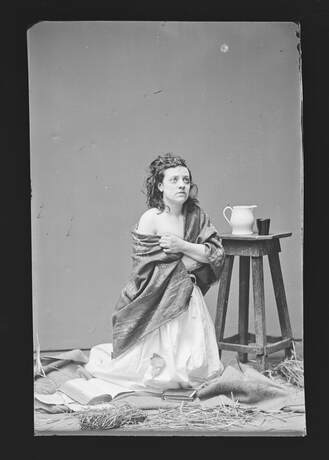 ​photo credit Mathew Brady Studios 1865 National Portrait Gallery at the Smithsonian
In a way, these revelations
make her renown
even more important
than the accounts she conjured up
​ for eager ticket holders.

Survival by self-promotion.
Same model as today.
​
We often think of women
​ in the Victorian age
as measured and well-behaved.
Pauline is neither.
She is spontaneous and gutsy.
And seemingly lives without apology.

Pauline successfully controls her destiny
despite the profound gender repression of her time.

image source Heritage Auctions, lot #72203
The fact is
there were many women
who actively served both sides during The Civil War.

It comes as no surprise
that many of these records have been lost
or were never actually documented
so it's impossible to say how "successful" a spy and scout
Pauline Cushman actually was
during her short tour of duty in the secret service.
​
The story lies afterward.
Pauline leaves behind scant personal affects
beyond her scrapbook of newspaper clippings.
But in these,
​reviews reveal her appeal
and commitment to the unity of our young country.

Her appearances rally the Union troops.
She tells stories of bravery
and reminds the crowd why we fight:

To preserve the founding principles set forth in the US Constitution:
Justice, Tranquility, Welfare and Blessings of Liberty
for ourselves and our Posterity.
​
What begins as an opportunity for self-preservation,
I like to believe,
becomes a mission of right and wrong. 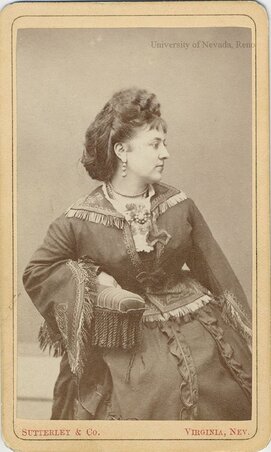 photo credit Sutterley & Co, Virginia City, NV 1872 University of Nevada, Reno
Brevit-Major Pauline Cushman continues to tour her program
of brave tales from the front
for several years,
teaming up with a talented young Irishman,
James M. Ward
whose rising star
guides him to New York
while Pauline chases her acclaim
across the country aboard
​ the newly completed Transcontinental Railroad.

William Christen tracks the towns
as our heroine heads
to the New West.
From St. Louis, MO
through Virgina City, Nevada,
Pauline banks on her renown.
though her tactics
​seem to become desperate,
her tales taller
as interest in re-hashing
the woes of the Civil War wanes.

By the time she arrives in San Francisco,
the venues hosting her performances
have shifted
from theaters to dance-halls
to backrooms of saloons. 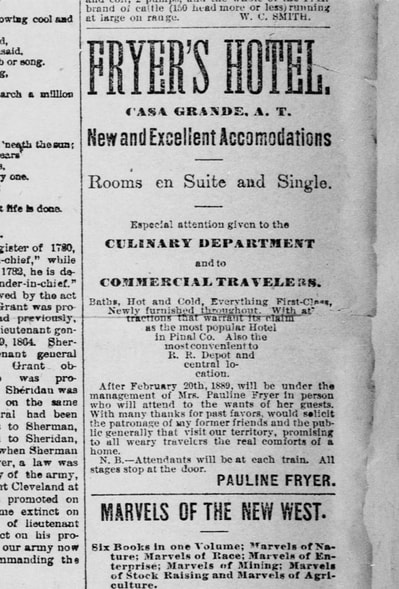 image source Arizonica Weekly Enterprise, March 9, 1889 page 3. Library of Congress - Chronicling America
In San Francisco she marries and shortly afterward widows again,
She becomes a successful hotelier
- as well as a notorius neighbor -
in Santa Cruz,
moves to LA and runs another hotel/bar,
where she meets and marries a cowboy,
travels with him to the Arizona Territory
and again runs a hotel/bar
until their divorce.
Pauline eventually makes her way
back to San Francisco
where in Dec, 1893 at age 60,
Pauline C. Fryer nee Harriet Wood
dies in virtual anonymity
of an opium overdose.

Whether intentional or accidental
- in pure Pauline fashion -
is left to eternal debate.

From ​Pauline Cushman: Spy of the Cumberland by William J. Christen:

"During [her final] twenty years
[Pauline] spent little time
in front of any footlights,
yet she remained the focus
of her own great drama." 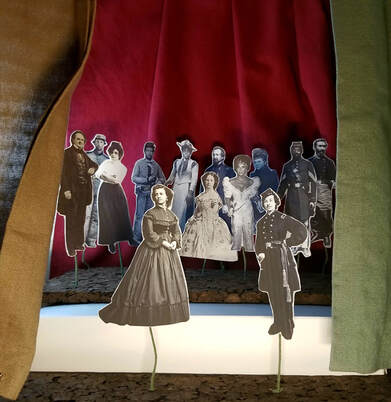 Miss Major cast
image source shelter in place shadowbox theater, Gulino
***
I first became captivated with Pauline
a few years ago
after reading her story
on a sun-faded display in the officer's circle
at the National Cemetery,
resolving then and there
to share her story
- whatever that story may be -
in the form of a musical.

Why a musical?
At the time,
I wasn't certain
why I was so certain
that her message should be delivered
as a musical
but after reading and researching,
I now know.
Musicals embody the
gaiety, spectacle, charm and wit
that served Pauline throughout her life.
It seems Miss Major
​could be nothing but a musical.

But back to
- whatever that story may be -

Thank you for following
along with me
while I put together my thoughts
about Miss Major.
As I work toward finishing the first draft,
it has become impossible to ignore the political parallels
of our current times with the Civil War days of Pauline's age.
I am moving forward with humility and respect toward the task at hand,
while taking a cue from Pauline to be bold.
with no apologies necessary.

The action is continuous,
using shadow and light
to create swirling landscapes. 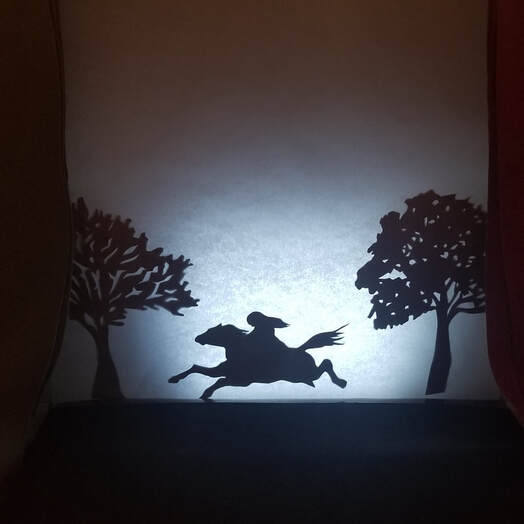 Sign up for the email list,
find out more info about the project
or volunteer as a reader by emailing
leagulino(at)gmail.com.
​
Tell 'em Pauline sent you.